x
Fitch Ratings’ banking sector outlooks for emerging markets (EMs) and developed markets (DMs) in the Asia-Pacific (APAC) are neutral, despite economic headwinds stemming from the weakening of demand in key global export markets, high inflation and the lagged effect of higher interest rates in most APAC economies.

We expect most APAC EM banking systems to report steady financial performance in 2023, or only mild variance versus 2022. This partly reflects our forecasts for continued robust economic growth in India and south-east Asia, and stronger growth in China, despite the weaker external environment. This should support loan expansion, with benefits to net revenue, which will largely offset weakening asset quality. 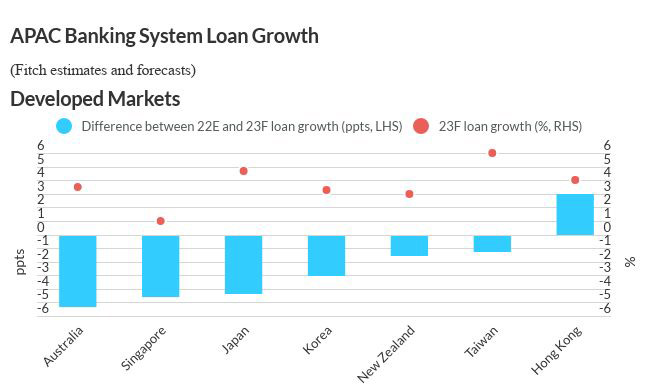 Banking systems in APAC DMs will post more mixed financial performance, but key metrics in most will be steady or at least maintain a degree of headroom relative to their Viability Ratings (VRs). We forecast all seven systems’ average common equity Tier 1 (CET1) ratios, a key metric for loss absorption buffers, to remain at broadly similar levels to 2022. Moreover, we generally expect APAC DM banking systems to weather the deteriorating global economic landscape in 2023 better than those in other regions.

Sri Lanka and Singapore are exceptions to the generally neutral country banking sector outlooks. Sri Lanka’s is deteriorating as its operating environment faces acute challenges, following the sovereign’s default on its foreign-currency obligations in May 2022. Sri Lankan banks’ financial profile vulnerability will be the highest in the region. By contrast, in Singapore we see an improving outlook, as profitability metrics strengthen further to above pre-pandemic levels, even with normalised credit costs and loan growth hit by the generally unfavourable external environment. Nonetheless, this is unlikely to be sufficient to drive Singapore bank ratings higher.

Following interest rate increases in 2022 in most APAC markets, excluding China and Japan, the dynamic between asset quality and net interest margins will be an important factor to monitor. We expect loan deterioration across APAC to be largely moderate, even as support measures unwind. Relief and forbearance measures may be extended in parts of the region – mainly in EMs – and loan-provisioning appears sound in most markets. Indian state banks generally have the lowest buffers, though their ratings benefit from assumptions around sovereign support – a common trait among APAC EM bank ratings.

Sovereign ratings will remain important for many bank Issuer Default Ratings in APAC, owing to assumptions around support. Outlooks on sovereign ratings are mostly stable, except in the Philippines (Negative), Sri Lanka (defaulted), and Vietnam (Positive).

A more severe downturn in APAC than the one we currently forecast could present downside risks for banks in 2023. It could push unemployment rates above our assumptions, further damaging households’ debt-servicing capacity. It might also affect sovereign ratings, depending on its impact on sovereign credit metrics, as well as government policy responses. However, should banks perceive operating conditions as stable, more could increase their appetite for risk in search of greater growth opportunities. Doing so without adequate increases in loss-absorption buffers could weigh on their VRs.