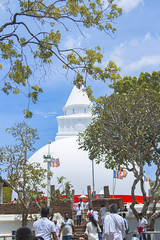 Kataragama (Sinhalese: කතරගම (katharagama), Tamil: கதிர்காமம் (katirkāmam)) is a pilgrimage town sacred to Buddhist, Hindu and indigenous Vedda people of Sri Lanka. People from South India also go there to worship. The town has the Ruhunu Maha Kataragama devalaya, a shrine dedicated to Skanda-Murukan also known as Kataragamadevio. Kataragama is in the Monaragala District of Uva province, Sri Lanka. It is 228 km ESE of Colombo, the capital of Sri Lanka. Although Kataragama was a small village in medieval times, today it is a fast-developing township surrounded by jungle in the southeastern region of Sri Lanka. It houses the ancient Kiri Vehera Buddhist stupa. The town has a venerable history dating back to the last centuries BCE. It was the seat of government of many Sinhalese kings during the days of Rohana kingdom.