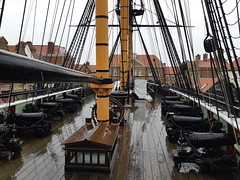 Trincomalee is one of two surviving British frigates of her era—her near-sister HMS Unicorn (of the modified Leda class) is now a museum ship in Dundee. After being ordered on 30 October 1812, Trincomalee was built in Bombay, India, by the Wadia family of shipwrights in teak, due to oak shortages in Britain as a result of shipbuilding drives for the Napoleonic Wars. The ship was named Trincomalee after the 1782 Battle of Trincomalee off the Ceylon (Sri Lanka) port of that name.