According to the latest external trade data released by the Central Bank, country’s trade deficit narrowed in July 2020, with a more than expected rebound in merchandise exports and notable reduction in merchandise imports.

As expected, merchandise imports remained subdued with the continuation of restrictions imposed on the importation of non-essential goods.

Meanwhile, terms of trade, i.e., the ratio of the price of exports to the price of imports, declined by 4.1% (year on year) in July 2020 as export prices declined at a faster pace than the decline in import prices.

Earnings from merchandise exports continued to increase to US dollars 1,085 million in July 2020 from US dollars 894 million that was recorded in June 2020, with the gradual recovery of both domestic and global supply and demand chains and efforts by the government to support the export industries. On a year-on-year basis, earnings from merchandise exports recorded a growth of 8.7 per cent in July 2020. This positive growth observed for the first time since February 2020 emanated from increased earnings from all three major categories of exports, namely, agricultural, industrial, and mineral exports.

Industrial exports recorded a growth in July 2020, year-on-year, for the first time since February 2020. This increase was due to increased earnings from exports related to food, beverages and tobacco, plastics and articles thereof, animal fodder, rubber products and printing industry products. With the considerable increase in earnings from personal protective equipment (PPE) such as face masks and protective suits, which are categorised under other made up articles, earnings from textiles and garments declined only marginally by 1.4 per cent in July 2020, led by lower garments exports to the USA and the EU. Meanwhile, despite a marginal decline in tyre exports, earnings from rubber products increased, led by exports of surgical and other gloves. Earnings from other subcategories of industrial exports including petroleum products, gems, diamonds and jewellery, base metals and articles and machinery and mechanical appliances declined during the month of July 2020.

Earnings from mineral exports increased in July 2020, year-on-year, led by higher earnings from ores, slag and ash exports along with earths and stone exports.

The export volume index improved by 26.1 per cent while the unit value index deteriorated by 13.8 per cent, in July 2020, indicating that the increase in exports was driven entirely by higher export volumes, compared to July 2019. 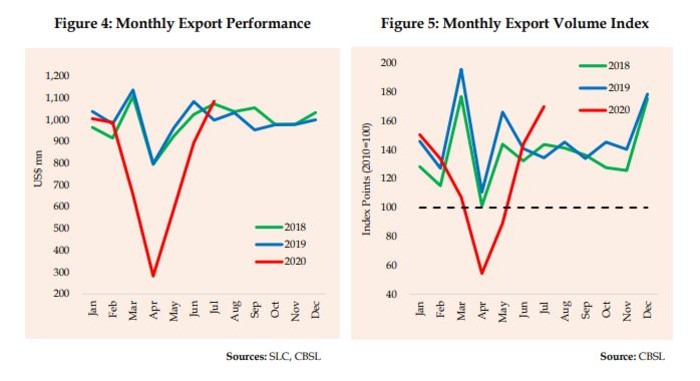 The year-on-year declining trend observed in expenditure on merchandise imports since March 2020 continued in July 2020 as well, recording a decline of 24.6 per cent, to US dollars 1,294 million. Expenditure on all major import sectors declined in July 2020. This reduction is partly attributed to the measures taken by the government to restrict the importation of selected non-essential goods.

The expenditure on intermediate goods imports declined in July 2020, year-on-year, led by fuel imports (-36.3 per cent) and the importation of textiles and textile articles (- 20.7 per cent). The reduction in expenditure in fuel imports was due to the refined and crude oil imports with lower petroleum prices in the international market. The average import price of crude oil declined to US dollars 46.23 per barrel in July 2020, compared to US dollars 68.73 a year ago. Import volumes of refined petroleum also declined, while higher volumes were recorded in crude oil and coal imports in July 2020 compared to July 2019. Meanwhile, the reduction in import expenditure of textiles and textile articles was led by lower imports of fabrics and yarn. Further, expenditure on all other sub categories under intermediate goods also declined in July 2020 compared to July 2019.

The expenditure on investment goods declined notably, with decline in all sub categories in July 2020, on a year-on-year basis, resulting from the restrictions imposed by the government to curtail import expenditure. Accordingly, expenditure on machinery and equipment (mainly engineering equipment, electronic equipment, telecommunications devices and machinery and equipment parts), building material (mainly iron and steel and articles thereof, plastic, rubber and glassware, ceramic products and cement) and transport equipment (mainly commercial vehicles such as tankers and bowsers and auto-trishaws) declined in July 2020 when compared with July 2019.

Both the import volume index and the unit value index declined by 16.1 per cent and 10.1 per cent, respectively, in July 2020, indicating that the decrease in import expenditure was driven both by lower volumes and lower prices when compared to July 2019. 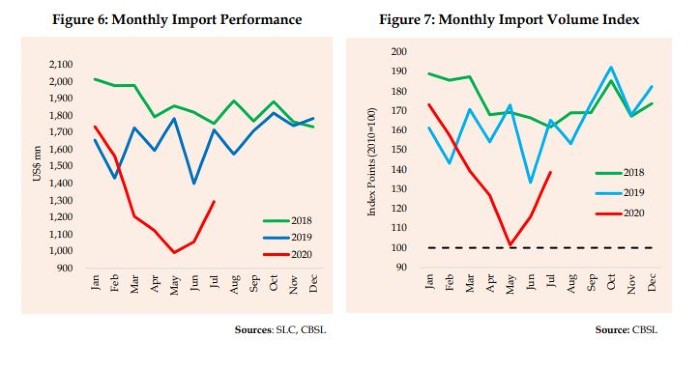