“The proportion of short-term debt (original maturity) has increased sharply in the domestic markets and, even on the external side, Sri Lanka now faces a eurobond redemption every year until 2030 with a couple of maturities due in 2022 and 2024-25,” the investment bank said in its latest report.

It further stated that the debt-maturity profile would indicate that, in a ‘tail risk restructuring scenario’, re-profiling of debt would be important to ensure that the gross financing requirements over the following years are covered.

“Considering the ownership by EPF and the commercial banks, rollover of domestic debt should not face any issues. However, on the external side, an extension of maturities by at least five years would be desirable looking at the maturity profile.” it added.

(This term ‘tail risk scenario’ is normally used by international financial markets to predict an event which has a low probability of happening, but can happen.)

The dynamics of the global economy have shifted with the coronavirus pandemic and Morgan Stanley is having its eyes on the emerging market group. The New York-based investment banking giant expects a year-end rally in emerging market currencies and sovereign debts.

Morgan Stanley analyst Jaiparan S Khurana said: “in the absence of a credible policy anchor like the IMF, debt-sustainability concerns would be the overarching theme. As such, markets will likely price in a worst-case scenario for now – even though it may not be a forgone conclusion – and Sri Lanka could even be de-linked with broader EM sovereign debt markets, with upside possible only post-crystallisation of a positive catalyst such as China support.”

Morgan Stanley analyst said that they expect a downside scenario should take bonds into the 54-60 handle, and accounting for carry one should look into adding bonds in the low 60s.

Meanwhile, the investment bank stated that, the messaging around whether Sri Lanka wants to engage in an IMF programme or not was unclear over the recent investor calls. “It would have been understandable if the negotiations were simply prolonged, but not engaging with the IMF could be particularly challenging and impact bond prices,” the bank said.

“We still don’t think that a debt restructuring or re-profiling is necessarily required in Sri Lanka but, as the push for PSI increases from the official sector going into 2021, it may also impact Sri Lanka if an IMF programme is not tied up soon,” the investment bank added.

“Sri Lanka faces US$5.4 billion worth of net drains on its FX reserves (August 2020-July 2021),and has US$834 million of short swap positions coming due as well,” Morgan Stanley said.

This number includes both the October 2020 and July 2021 eurobond redemption.

In addition, the LTM current account deficit stood at US$2.2 billion as of 2Q20, which would have likely moderated further in 3Q20 owing to lack of tourism receipts.

Remittances have been holding up steady for now (-1.5%Y in 8M20) but that’s likely due to workers sending final savings home post job losses which could be bulkier than regular remittances.

“As such, should remittances turn lower and tourism remittances don’t rebound fast enough, the overall external funding gap the sovereign could be facing over the next 12 months could be circa US$9 billion.” it said.

In terms of sources,FX reserves exgold stood at just US$6.9 billion as of end-August.

“We had previously assumed that SriLanka would also benefit from IMF disbursement (US$800 million), China loans (US$1.5 billion), other multilateral and bilateral support (US$1 billion), India’s swap line (US$0.4-1.4 billion), G20 debt suspension (US$1.2 billion), eurobonds and syndicated loans (US$2 billion) and SLDB rollovers (US$1.2 billion), which would have covered the external funding gap to a large extent.” it said.

However, now in the absence of an IMF programme, Morgan Stanley argues that it’s not only the IMF disbursements which would be impacted, but Sri Lanka’s ability to undertake eurobonds and other multilateral support could also see downside risks.

“This is important considering that a significant share of committed but undisbursed facilities is owed to ADB and the World Bank. Sri Lanka was ineligible for G20 DSSI in 2020 and, while there is scope for the initiative to be expanded to include other countries including Sri Lanka in 2021, the support may not be forthcoming without PSI as debt-sustainability concerns could remain in the absence of IMF support,” it said.

“Only a small proportion of India’s swap line – just the SAARC component – and China’s loans have materialised thus far. Finally, a significant share of undisbursed facilities is also owed to Japan but, with the recent cancellation of some Japan-funded projects, it’s unclear how much of the committed amount will be disbursed,” it added.

Further, the investment bank stated that Sri Lanka’s total public debt stood at LKR 13.9 trillion or US$75.1 billion as of end-May and this translates to over 90% of GDP ,a worrying level.

Of the total,53% of the debt was classified as domestic and 47% as external debt.

“The domestic debt includes the SLDBs which are denominated in US$, but ownership is primarily via local banks. Considering that the outstanding stock of SLDBs was much higher in 2015-17, there should be some scope for the sovereign to raise foreign currency financing domestically, if required,” it said. 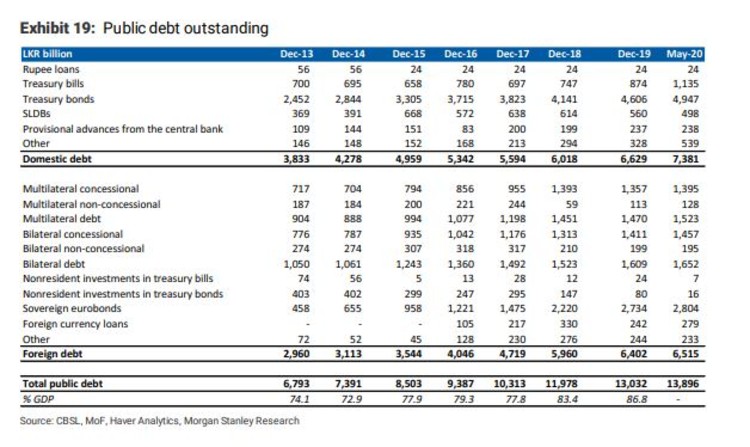 Meanwhile, looking at the ownership profile of domestic debt, the investment bank noted that  the Employee Provident Fund (EPF) seems to be an equally important player as domestic commercial banks.

This makes any potential restructuring difficult for domestic debt, considering the socio-economic impact. If the ownership was concentrated more with the commercial banks,a restructuring would still have been possible as losses in the bond portfolios would have been offset against further profits of the banks, and regulatory forbearance would have been exercised in the interim, it said.

“With the EPF ownership which should be in the longer end of the curve, we think that a re-profiling becomes more likely than a restructuring in a worst-case scenario,” it added.

Looking at the ownership profile of sovereign external debt, the key thing to note is that near half of the debt is commercial borrowings via eurobonds and loans.

On the other hand, the direct obligations to China Inc. are relatively small at just 10% of total debt. It is likely that there is some Chinese lending to SOEs and joint venture projects as well which may increase the overall share of debt owed to China, but the headline number of 10% is in contrast with market belief that the number is much higher.

“Considering the preferred creditor status of many multilateral and bilateral lenders,and small share owed to China,any savings that need to be extracted via external debt in a tail-risk scenario have to be targeted towards eurobonds,” it said.