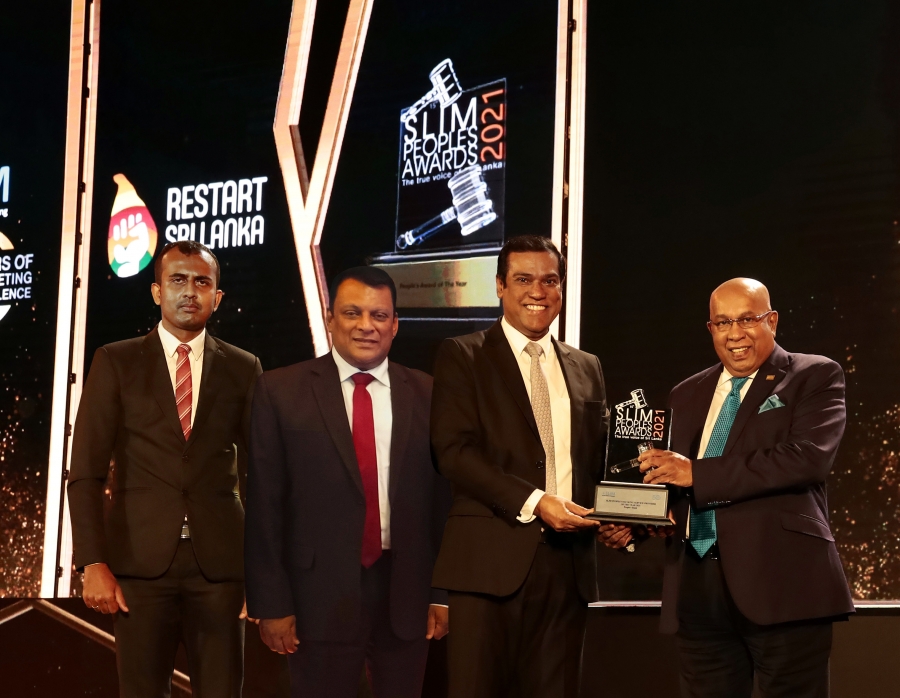 The Bank of the People, People’s Bank, once again reasserted its industry leadership position by securing the highly-coveted “People’s Banking Service Provider of the Year” award for the 15th consecutive year, at the recently-concluded ‘SLIM Nielsen People’s Awards 2020’. Organized by the Sri Lanka Institute of Marketing (SLIM) and the AC Nielsen – a leading global information and measurement company – ‘People’s Awards’ is the main award ceremony in the country which recognizes and champions the true choice of the people annually. People’s Bank CEO/ General Manager, Ranjith Kodituwakku, together with the corporate and executive management of People’s Bank were present at the awards ceremony to triumphantly accept the prestigious award.

People’s Bank is the country’s Premiere Licensed Commercial Bank, with Sri Lanka’s largest banking footprint comprising 741 branches and service centers islandwide. With a history spanning 60 years, the Bank benefits from a staff strength of close to 8,000, serving more than 14.0 million customers and close to 19.0 million account relationships – which is by far the largest for any Financial Services provider in country. Established under the People’s Bank Act No. 29 of 1961, the Bank carries a National Long-Term Rating of “AA-(lka/ Stable)”; by Fitch Ratings Lanka Ltd. People’s Bank is the first and only Bank in Sri Lanka to be accredited with the ISO/IEC 27001:2013 certification; the highest international accreditation for information protection, and security.

With a view to bringing the benefits of digitalization to the entire nation, People’s Bank embarked on a digital transformation journey back in 2015 by taking a pioneering role in digitization and customer engagement. Since then, a host of diversified digital banking solutions have been launched that deliver enhanced convenience, speed and efficiency, and convenience to customers at every point in their interactions with the bank. People’s Bank prides itself for being at the forefront of facilitating digital-financial services penetration into the rural hinterlands of the country and has recorded unmatched levels of success in supporting the nation’s evolution into a digital society.

More significantly, People’s Bank has earned loyalty from the people of the country by fulfilling customers’ aspirations, hopes and dreams. The Bank has introduced a number of loan schemes such as Personal Loans, Housing Loans, Professional loans, Educational Loans and Vehicle Loans to uplift living standards of its customers, in addition to supporting enterprise development with various schemes to support the farming and fishing communities as well as SMEs.

During the COVID 19 pandemic, in order to soften the impact on the overall economy, the Bank swiftly implemented a range of relief packages including moratoriums mandated by the government and provided relief to over 480,000 individual customers which is the highest number provided by a bank in Sri Lanka. Secretary to the President Dr. P.B. Jayasundera also acknowledged the contribution of People’s Bank towards nation building during Covid-19 pandemic situation at the recently held Colombo Development Symposium.