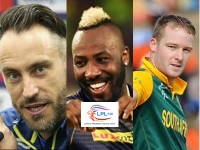 Five foreign players, including Andre Russell, Faf du Plessis and David Miller have withdrawn from the Lanka Premier League (LPL) less than a week after they were drafted into franchise teams.

Miller, du Plessis and Dawid Malan have become unavailable because of the limited-overs series between South Africa and England, set to begin on November 27. Russell, meanwhile, has pulled out due to injury, according to Sri Lanka Cricket. Manvinder Bisla, the fifth player to exit the tournament, is not believed to have provided a reason though. The LPL is scheduled to start on November 21 and run until December 13.

“The franchises that had these players will have to negotiate with other players to take their place,” LPL director Ravin Wickramaratne told ESPNcricinfo. Russell, Miller, du Plessis and Malan had all been selected as marquee players, which means the franchises are not bound by the constraints of the draft payment structure when they seek new players.

Although it was suspected that the players from South Africa and England would withdraw once England’s tour of South Africa was confirmed, Russell’s exit is more of a surprise. He has not played for the Kolkata Knight Riders since the game against the Sunrisers Hyderabad on October 18 owing to a knee injury but hasn’t yet pulled out of the IPL entirely either. No update has been given on his further involvement in the ongoing tournament, although Wickramaratne cited injury as the cause of his withdrawal from the LPL.

While these withdrawals are a significant blow to the tournament, they are not a death knell just yet. The hardest hit franchise is the Colombo Kings, who had all three of Russell, du Plessis and Bisla on their roster. The Jaffna Stallions had Malan.

With less than four weeks to go until the scheduled start of the LPL, there are still substantial logistical hurdles to surmount before the tournament can get off the ground. A major sticking point remains the quarantine – Sri Lanka’s health ministry has insisted it must be 14 days of confinement in a hotel room, which some players have expressed dissatisfaction with.

However, SLC remains optimistic that the tournament will go ahead.