The 7.55% 2030 dollar bond was indicated up about 0.7 cents to 27.9 cents on the dollar on Wednesday, the highest since mid-September. The budget for 2023 was passed on Tuesday by parliament.

Sri Lanka pledged to raise revenues by 63% and cut fiscal deficit to 7.9% of gross domestic product from an estimated 9.8% in the current year, steps seen as key to securing a $2.9 billion IMF bailout that can pull the nation out of its worst economic crisis in decades. After the default in May, it is negotiating debt restructuring with its major creditors.

Dollar bondholders can expect to see a 40% hair cut if Sri Lanka is to bring its debt down to sustainable levels, said Bloomberg Economics economist Ankur Shukla, adding the central bank will avoid raising borrowing costs further in its Thursday meeting to avoid adding to its debt burden even as inflation stays high.

Still, the rebound in dollar bonds could be at risk as State Finance Minister Shehan Semasinghe on Tuesday said Sri Lanka may not restructure domestic debt, entailing a higher burden on foreign bondholders.

“Achieving the budget targets could be tricky as they look ambitious,” said Saurav Anand, an economist with Standard Chartered Plc in Mumbai. “But in the near-term, the focus is on debt restructuring and whether local debt will be included.” 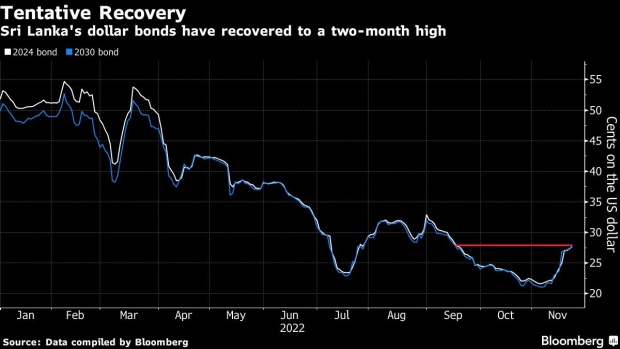