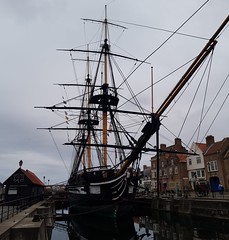 History
1812–1847
Trincomalee is one of two surviving British frigates of her era—her near-sister HMS Unicorn (of the modified Leda class) is now a museum ship in Dundee. After being ordered on 30 October 1812, Trincomalee was built in Bombay, India, by the Wadia family [1] of shipwrights in teak, due to oak shortages in Britain as a result of shipbuilding drives for the Napoleonic Wars. The ship was named Trincomalee after the 1782 Battle of Trincomalee off the Ceylon (Sri Lanka) port of that name.

Work on the Trincomalee began in May 1816. Ceremonially an engraved silver nail was hammered into the ship’s keel by the master shipbuilder Jamsetjee Bomanjee Wadia, this being considered vital for the ship’s well-being, according to Parsi Zoroastrian tradition.[2]

With a construction cost of £23,000, Trincomalee was launched on 12 October 1817. Captain Philip Henry sailed her to Portsmouth Dockyard, where she arrived on 30 April 1819, with a journey costing £6,600.[3] During the maiden voyage the ship arrived at Saint Helena on 24 January 1819, where she stayed for 6 days, leaving with an additional passenger, a surgeon who had attended Napoleon at Longwood House on the island, Mr John Stokoe.[4]

After being fitted out at a further cost of £2,400, Trincomalee was placed in reserve until 1845, when she was re-armed with fewer guns giving greater firepower, had her stern reshaped and was reclassified as a sixth-rate spar-decked corvette.[5]

1847–1857
Trincomalee departed from Portsmouth in 1847 and remained in service for ten years, serving on the North American and West Indies station. During her time, she was to help quell riots in Haiti and stop a threatened invasion of Cuba, and serve on anti-slavery patrol. In 1849, she was despatched to Newfoundland and Labrador before being recalled to Britain in 1850. In 1852 she sailed to join the Pacific Squadron on the west coast of America.[6]

TS Foudroyant
Trincomalee finished her Royal Navy service as a training ship, but was placed in reserve again in 1895 and sold for scrap two years later on 19 May 1897. She was then purchased by entrepreneur George Wheatley Cobb, restored, and renamed Foudroyant in honour of HMS Foudroyant, his earlier ship that had been wrecked in 1897.[7]

She was used in conjunction with HMS Implacable as an accommodation ship, a training ship, and a holiday ship based in Falmouth then Portsmouth. She remained in service until 1986, after which she was again restored and renamed back to Trincomalee in 1992.[8]

Trincomalee holds the distinction of being the oldest British warship still afloat[9] as HMS Victory, although 52 years her senior, is in dry dock.

Until his death in 1929, the Falmouth-based painter Henry Scott Tuke used the ship and its trainees as subject matter.[citation needed]